Born in the UK. School had me studying engineering, science and electronics with a keen interest in performing in the school shows. My dreams for the future were in the entertainment world. The schools Career advisor had different ideas, explaining my dreams of working in the entertainment world were unrealistic. So engineering is what I carried on studying at college. With more of my spare time spent working on amateur shows I decided enough was enough and changed to a 3 year study of Theatre Lighting Design and Production Management.

This took me straight into the world of theatre working in London's West End. While working in the West End I was asked if I would be interested in working on a tour and I jumped at the chance. One thing led to another and before long I was applying my skills in theatre, rock tours, TV shows, Films and events.

With the 90's fast approaching the lighting world started to take advantage of new technology and my previous engineering studies started to pay their way. This got me involved in the world of Theme parks and architectural lighting. It also got me involved with the company Artistic Licence which proved a very interesting time as I worked with them during their initial development of Art-Net and RDM for DMX.

Shortly after this I started my own company working on various architectural projects and live shows. I have always had a love of the Far East and a chance meeting with the MD of Hong Kong based Ptarmingan Integration got me involved with projects in Asia. After finishing each project in Asia returning home to the UK always felt like leaving the party early. When I was asked if I would like to join the company and head the Singapore office I did not have to be asked twice and I have now lived in Singapore for the last 10 years.

When not involved in the world of high tech lighting you will find me in the world of motorsport. I have a FIA racing licence and own Go Karts that can reach speeds of up to 120KPH. I compete in South East Asia Championships and have raced in Singapore, Malaysia, Macau, Indonesia and Thailand. 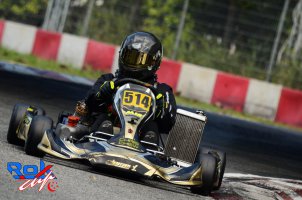